The filming of “Johnny” by Daniel Jaroszek has just ended. The film tells the story of father Jan Kaczkowski, the founder of an in-home hospice in Puck, an extremely popular priest, vlogger and author, who was breaking all stereotypes. The main characters from the film are played by Dawid Ogrodnik and Piotr Trojan. Other actors we will see on the screen include, among others: Maria Pakulnis and Joachim Lamża.

“Johnny” is a true story that inspires and touches people’s hearts. It is told from the perspective of father Jan Kaczkowski’s protégé – Patryk Galewski, a boy with a difficult start in life.

Patryk breaks into a house in a small town. He is sentenced to community service at the hospice in Puck, where he meets father Jan Kaczkowski, who is quite an unusual person. The priest engages young boys from the vocational school who seem to be tough rebels, into helping the terminally ill. In his work, he focuses on intimacy, affection and the struggle to establish a connection with other people. He teaches empathy. And he does it with a great sense of humour, which gains him huge popularity. Shortly afterwards, father Jan himself becomes a patient in the hospice. Patryk is put in a position that will change his entire life.

– It is not a story about building the hospice or fighting a terminal disease. “Johnny” is an emotional rollercoaster that alternately makes you laugh and cry, is both scary and touching. The plot leads us from extremely dark moments through a battle with oneself and the outside world to finding meaning and hope in life. The viewers will be overwhelmed with emotions not only while watching the film but also many hours later – says the director, Daniel Jaroszek, about the film. 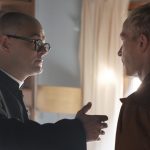 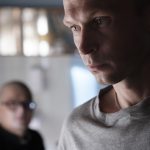 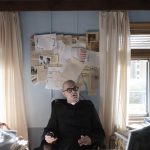 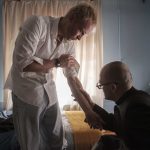 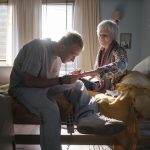 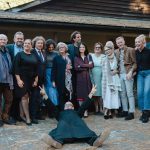 The role of father Jan Kaczkowski, who is admired by the religious community and atheists alike, will be played by Dawid Ogrodnik. Piotr Trojan, who has been repeatedly awarded for his part in the film “25 Years of Innocence. The Case of Tomek Komenda”, will star as Patryk. Other actors we will see on the screen include, among others: Maria Pakulnis, Anna Dymna, Joachim Lamża and Witold Dębicki. The author of the screenplay is Maciej Kraszewski. The director of the film is Daniel Jaroszek, who up to this moment has carried out projects in the advertising industry. “Johnny” will be his first feature film. Daniel has three Advertising Creators Club swords for projects he has done with Papaya Films.

The film is created in collaboration with the family of father Jan and the Jan Kaczkowski Foundation.

The executive producer of the film is Festival Group sp. z o.o., and the distributor is NEXT FILM.

THE LAST DAY OF SHOOTING

On the last day of shooting “Johnny”, the family of father Kaczkowski appeared on the set: the parents – Helena and Ziuk Kaczkowski, siblings – Magdalena Sekuła and Filip Kaczkowski, friends – Patryk and Żaneta Galewski, Anna Labuda – the head of the Puck hospice, Jurek Owsiak, the volunteers and employees of the hospice in Puck and Father Jan Kaczkowski Foundation. Hanna Pruchniewska, the mayor of Puck, and Jacek Karnowski, the president of Sopot, also made their appearance.

The shooting began in August and took place in outdoor locations in Konstancin, Puck and Sopot, among others. The cinema premiere is scheduled for autumn 2022.